Mrs Cox used the opportunity to raise the issue of loneliness and the forgotten army of volunteers who help tackle it, following on from her work on the issue locally.

Mrs Cox also took issue with David Cameron’s plans to weaken the ban on fox hunting, the impact government cuts have had on flood defences and on US presidential hopeful Donald Trump.

If you missed the column, you can read it here.

By Jo Cox – From the Mirror online 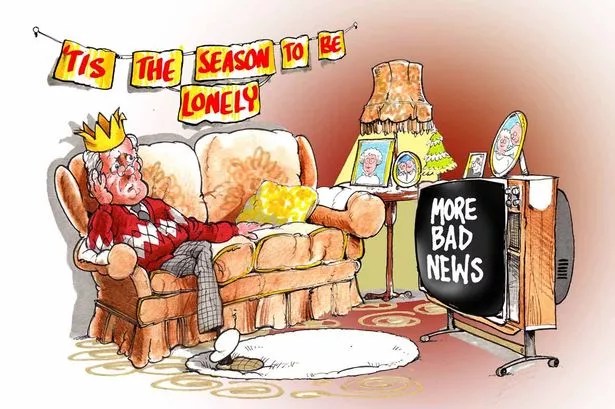 As a working mum with two children under five, I’m sure I’m not alone in often wishing for a little quiet time to myself.

But for a lot of people, solitude is all they know.

Last month a report said one in five people over 60 feel they have no one to turn to. And five million older folk say the television is their main source of company.

There is also new evidence that social isolation can be as bad for you as smoking 15 cigarettes a day.

The reality is that loneliness is reaching epidemic levels, and not just among older people. Before Christmas the Prime Minister hosted receptions for volunteers and older people to raise awareness of loneliness. That’s great. But a lot more is needed if we’re serious about tackling it.

This crisis is driven by three things, an older ageing population, changing family structures and lifestyles, and Government policy.

The first two aren’t easy to fix, so getting the third right becomes all the more important.

Yet, at present, the Tories are getting it badly wrong with hugely underfunded social care and a lack of joined up services. Trying to pick up the pieces is an army of volunteers, befrienders and good neighbours.

I met David, a volunteer with the Royal Voluntary Service in my constituency, who visits an elderly man every week for a chat.

My mother-in-law Sheila helps recruit volunteers who do the same, and in her spare time visits older people from the local church community.

These visits are a lifeline for people who might not otherwise see another person from one week to the next.

People like David and Sheila are also stepping in to sort out a wide range of issues that should be being dealt with by professionals. They are nothing short of heroes and they deserve recognition.

Volunteers are a key part of solving this crisis but they can’t do it alone. That’s why I’ll be campaigning in 2016 for the Government to raise its game.

The Campaign to End Loneliness, along with Age UK and others, are doing excellent work.

They want government to get a better grip on the scale of this crisis and develop a properly funded strategy to tackle it, including higher quality and more targeted services for the most lonely.

If we are serious about tackling this problem the Prime Minister needs to spend more time not only meeting volunteers but helping them do their job by him doing his.

Every month Jo Cox writes a column for the Batley News and Spenborough Guardian. This month’s column appeared in this week’s editions.

Earlier this month I met a volunteer from Batley & Spen who spends some of his spare time each week visiting an elderly man. David volunteers as a befriender for the local Royal Voluntary Service. He visits, has a chat, helps out with a few things in the house and takes him out for a cuppa.

Every month I’m supporting or promoting a local charity and this month I wanted to use the Charity of the Month to highlight the wonderful work being done by RVS and organisations like them, especially at this time of year when loneliness and isolation are particularly acute.

The general election campaign brought the scale of the problem home to me, meeting so many people who raised the fact they were lonely. But what is truly startling is that most people affected won’t talk about it.

The Co-operative Group did a survey that found two thirds of people in Yorkshire would be uncomfortable confiding in a friend or relation that they feel lonely. Almost 30 per cent said they knew someone who was lonely and 14 per cent said they were regularly affected by loneliness. It is now ‘highly likely’ that people will experience loneliness at some point in their lives.

National research shows that among over 60s one in five who experience loneliness say they have no one to turn to and there are 2.5m people over 60 who wouldn’t know where to go for help. These are desperately sad statistics.

It is a particular problem among older people, with many fearing they will be a burden on loved ones or local services. The truth is that loneliness causes a burden on the NHS as the symptoms extend beyond mental health and emotional wellbeing and have a detrimental effect on physical health. But actually, young or old, loneliness doesn’t discriminate.

This is why the sort of David is doing is an incredibly valuable way of making a difference. And it is also simple, which means it is something many of us could easily help with. Looking in on a neighbour, visiting an elderly relative or making that call or visit we’ve been promising to a friend we haven’t seen in a long time.

In February the Mayor of Kirklees is sponsoring a civic celebration of volunteers, the unsung heroes making a difference in their community every day of the year. I hope anyone reading this will think about nominating anyone they know who deserves some recognition for the voluntary work they do.

Not only is this a very worthwhile event but it is also a wonderful way of promoting the sort of voluntary work David and thousands of others do right here in Batley & Spen. Sadly, while it’s nice to celebrate, increasingly more and more volunteers are needed to fill gaps in services that once were taken for granted. I hope more people with think about getting involved.

Finally, can I take this opportunity to wish all your readers a merry Christmas and a happy new year.